*Marvel: A trinity of triumphs premiering in the adventures of Marvel’s Mightiest Heroes, kicking off with Avengers #62, which saw the first appearance of the Black Panther’s nemesis, M’Baku, the Man-Ape! A featured player in the Black Panther’s solo film, M’Baku (the ‘Man-Ape’ soubriquet dropped for media-friendliness) was one of several breakout characters from the BP movie. Avengers #83 saw several of Marvel’s fabulous femmes – Black Widow, Medusa, the Scarlet Witch and the Wasp – join forces as the Lady Liberators, under the leadership of the vivacious Valkyrie! Val’s origins and history are too complex to go into here, but this was the first appearance of the Valkyrie character and persona, as later portrayed by Tessa Thompson in ‘Thor: Ragnarok’ and ‘Avengers: Endgame’. Lastly, the Taskmaster, having made a last-page threatening cameo in Avengers #195, made his first full appearance in #196. A skill-mimicking polymath with the ability to instantly replicate any opponent’s tactics, Tasky is scheduled to be the Big Bad in next year’s Black Widow solo flick.
PICTURED: AVENGERS
#62 FN+ £55 SOLD
#83 FN-p £55 SOLD
#196 VF- £90 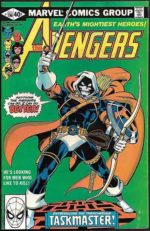