*Horror 1940-1959: L B Cole was one of the most famous of Golden/Atomic Age cover artists. He drew in a variety of genres, and was artistic director at Star, illustrating 95% of the company’s covers; his lurid, feverish style, almost hallucinogenic, graced horror, science-fiction, jungle and romance alike. Star took over the venerable title Blue Bolt in 1949 (previously it had been a classic anthology title starring the titular character, with much work by Simon & Kirby, Everett etc, lasting throughout the war years and beyond). By the time we got to the #112, Blue Bolt himself was long gone and the emphasis of the series had changed to horror, according to the zeitgeist of the time. Indeed, the title was rebranded as Ghostly Weird Stories from #120 onwards. Contents include three stylish horror shorts by Jay Disbrow plus a Torpedoman story from Captain Flight and a jungle story from the same source, both with horror overtones. But it’s the wonderful L B Cole cover for which this issue is prized, showing a monstrous beast erupting from a fiery pit below. A nice copy with a clean cover and bright colours. Some edge wear with tiny creases breaking colour, but a solid spine and very nice pages. There is just a suggestion of staple rust, but this is very slight and does not impair the comic. High resolution images are available on request.
PICTURED: BLUE BOLT WEIRD TALES #112 VG £600 SOLD 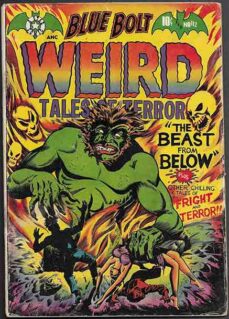