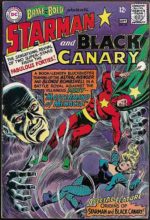 *DC: Following the re-introduction of the Justice Society of America in the early 1960s, a few sporadic attempts were made to give some individual JSA members tryouts. Sadly, none of them were successful in the long term, but all of them were lovely comics. Closest to our hearts here at 30th C. is the pair of Brave & Bold issues co-starring Starman and the Black Canary, two JSAers who never even met back in the Golden Age, but whose styles and skill sets meshed beautifully in these adventures featuring Golden Age villains the Mist, Sportsmaster and the Huntress, and co-starring (in the second issue) fellow JSA’er Wildcat. By Gardner Fox and Murphy Anderson, these are among the finest comics of their era, and shamefully disregarded by the general collecting community. These copies are both VF- , attractive bright copies with sharp corners, firm staples, lustrous cover colour and excellent interiors.
PICTURED: BRAVE & BOLD
#61 VF- £50
#62 VF- £40