*Marvel: Two of the last few releases from the Square Mile Collection this week. When Stan Lee was charged with creating a comic to rival DC’s success with the Justice League of America, although the Fantastic Four were very different, he did take a leaf out of Gardner Fox’s JL book by reinventing a classic Golden Age character in a new guise. Johnny Storm, the Silver Age Human Torch, was popular enough to graduate to his own series in Strange Tales, where he came up against some of the most bizarre (and, let’s face it, lame) villains of the Marvel Age of Comics. Not so much the Wizard, here in #105, who went on to menace the FF and lead the Frighful Four, but definitely the Painter of a Thousand Perils in #108. #105 has some spine wear and a hint of Marvel chipping at right edge, but is clean with great page quality and tight staples. #108 has a little more chipping, but tight and flat, very minor edge wear and great page quality and staples.
PICTURED: STRANGE TALES
#105 FN p £85 SOLD
#108 VG+ p £50 SOLD 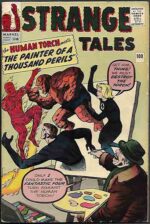