Our spotlight on previously listed stock this week turns to Hurricane #1, complete with its Free Gift, one of the rarest of all accompanying gifts. In February 1964 Fleetway/IPC released Hurricane, a companion to their highly successful Valiant. Featuring in the lead a lightly comedic bruiser – ‘Typhoon Tracy, as opposed to ‘captain hurricane’ in the lead slot, Hurricane ploughed the expected row of adventure, war, sports and historical strips, but allocating several of them a longer run (5 pages, rather than the two or three that were the weekly standard), and with its slightly larger size, seemed to be aiming a little higher age-wise. The most famous alumnus of Hurricane, apart from Tracy himself, was ace racing driver ‘Skid Solo’, who had a decades-long career after Hurricane’s eventual absorption into Tiger. Because it had a regrettably short run, a mere 63 issues, Hurricane is highly sought after today, and this first issue, in a gleaming Fine condition, is made extra precious by the presence of the Free Gift which originally accompanied it – a punch-out cardboard model of the TSR2 fighter plane, not punched out (in this instance), but still in its original ‘flat’ form, albeit with the card having sustained a light horizontal fold at some time; the original rubber band used to launch it is missing (but easily replaced). We’ve graded the free gift as Very Good, and together the pair are on sale for £200. 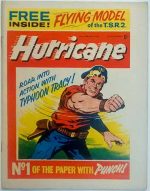