The ‘original’ Marvel UK series that never quite was… 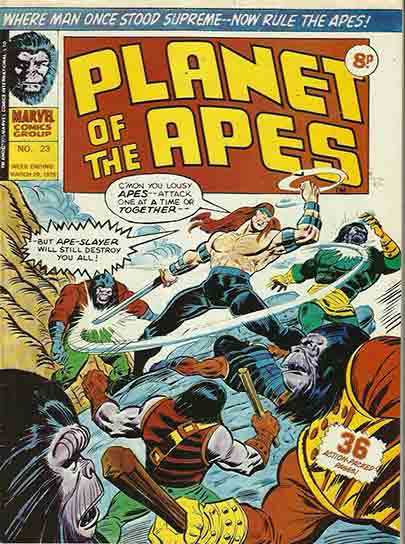 No, the first ‘new’ series to emerge from the offices of Marvel UK – using the term, admittedly, in the very loosest sense of the word – first appeared in Planet of the Apes weekly number 23, cover-dated March 29th, 1975.

It was then that a breathless world was treated to the debut of the one, the only – Apeslayer!
Just like that. One word, no hyphen, though on the covers they weren’t 100% consistent.
But who was Apeslayer?

Well, his genesis was the result of desperation and the kind of plucky make-do-and-mend for which a certain generation was renowned. In 1975, Planet of the Apes-mania was at its highest. Marvel US was publishing all-new material backing up their comic strip adaptations of the movies, and Marvel UK swiftly climbed on the bandwagon.
For the benefit of those too young to recall, Marvel UK at that time operated solely as repackagers, responsible for cutting up black & white stats of the Marvel monthlies into smaller chapters for the traditional weekly serialised format of the UK, and occasionally topping-and-tailing them with new splash or end panels, or covers, when the disparity of frequency caused unexpected story breaks. Even then, the majority of such work was handled by junior staff at Marvel US, with only occasional intervention by British hands. But when Marvel UK launched Planet of the Apes Weekly, less than a year after the US launch, the weekly schedule quickly zipped through the extant US material, and even by frantically padding the weekly with anthology sci-fi stories from Marvel’s ‘Big-Panty-Monster’ era, they soon faced the prospect of either having to run issues of Planet of the Apes which were entirely ape-free, or suspend publication.

But someone – who has, astonishingly, never stepped forward to take credit – came up with an idea that, if not brilliant, at least showed some lateral thinking.
The War of the Worlds/Killraven series in Marvel US’s Amazing Adventures title featured a lone human warrior who assembled a group of rebels against the invading Martians, who were seldom seen except in their distinctive tripedal craft.

Killraven hadn’t yet been reprinted in Marvel UK titles. So, why not re-purpose the series? Change the name of the hero, alter ‘Martians’ to ‘Apes’ throughout, a bit of re-lettering and paste-up of the odd Gorilla head, and Fanny’s Your Auntie.

Set in the far-flung (well, it was, in 1975) future of 2018, where humans had been under the dominion of apes for decades (hm), young Johnathan Dozer grew up to be the revolutionary Apeslayer after seeing his mother and brother enslaved and destroyed by Martia – er, Apes. Using the skills he learned in the Apes’ gladiatorial arenas against them, he led a rag-tag group of freedom fighters against the simian overlords. 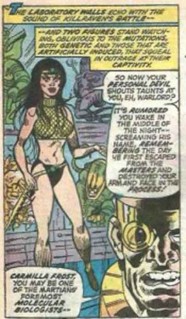 Is this what fashionable Molecular Biologists will be wearing in three years? References to ‘Martians’ were meticulously deleted, and changed to ‘Apes’ throughout… 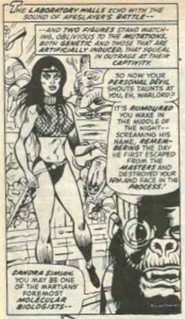 …Except when they weren’t. They changed Carmilla Frost to Sandra Simian, but have her as one of the ‘Martians’ servants. Oopsie. Still, maybe they were Martians Apes. Yeah, that’ll be it.

It is a bizarre read to the contemporary eye; the names of Killraven’s companions, despite no strict need, have been changed for the Apeslayer iteration, so that instead of M’Shulla you have Mala, Hawk becomes Arrow, and so on. One of the changes – Old Skull for Socrates – is actually better, the erudition implied by the Socratic name being in ironic contrast to the character’s naive, childlike – oh, okay, brain-damaged – manner of speaking.
Oh, and let’s not forget the ladies. Carmilla Frost, Killraven’s comrade-in-arms and leading lady, becomes the tremendously subtle Sandra Simian. That’s right, she apparently loved her indentured slavery at the hands of the Apes so much she adopted a surname in tribute to them!

Skimming through what is basically the first four War of the Worlds/Killraven adventures from Amazing Adventures #’s 18-21 (May-Nov 1973) chopped into chapters and with the serial numbers filed off, we see hastily-drawn Ape-Heads being pasted onto human collaborators and mutant warriors alike, with sketchy relettering of names giving the impression that they’re being ‘spoken’ by a different voice entirely, much like the old-style cinema ads, where a specific location – usually with a completely different accent and timbre – would be dubbed onto a generic promotional soundtrack.

After the eighth Apeslayer instalment, Marvel US had caught up with the backlog – in fact, sped ahead, creating an extensive inventory – so we ended on a cautiously optimistic note, with Sandra Simian joining Apeslayer’s merry band and facilitating their escape – and then, their gap-filling purpose served, we never saw them again!

But with the advent of the new Secret Wars’ redefining of the Marvel Universe, and their statement that all Marvel publications will be represented, readers beware; Apeslayer may yet rise again! 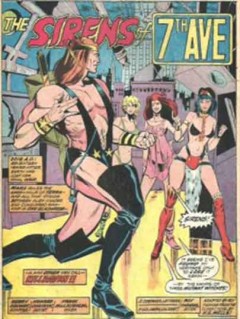 The Martian’s genetically-engineered ‘Sirens’, who seem to favour Anne Summers for clothes shopping in the original… 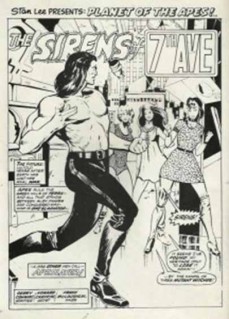 …Have switched to Primark Summer Casuals in the ‘Apeslayer’ iteration. Mind, Killraven’s leather mankini n’ thigh boots has been commuted to a more sturdy ensemble, so it’s at least equal-opportunity censorship…