“Marney the Fox” – Cute fluffy tale of a cuddly animal roaming the countryside? Or Kafaesque reflection on the inhumanity of humans, spiralling into nihilism? Bit of both, really.

…But definitely leaning towards the latter.

“Marney the Fox” launched in Buster weekly in the issue dated 22nd June 1974, and ran weekly until 11th September 1976. The saga of a wandering orphaned fox cub, who grows to maturity while being constantly hunted and taunted by ‘hated man’, was, let’s get it right in the shop window, an emotional roller-coaster, yanking relentlessly at the heartstrings of its young readership. 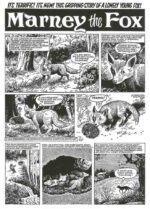 Unlike most series in boys’ weeklies, which tended to be strictly oriented for either action or laughs, Marney turned up the anguish to a degree more often seen in the girls’ weeklies such as Mandy or Tammy. One poll of Tammy readers famously indicated that one of their favourite things about the comic was ‘stories that make me cry’, and, in an early blow for gender equality, Marney the Fox had readers sobbing in the proverbial aisles.

Marney was created by the team of writer Scott Goodall and artist John Stokes, the same folks who created Fishboy, of which I have spoken previously – in fact, for several months, Marney and Fishboy overlapped in Buster weekly. 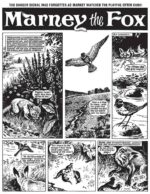 I’ve given high praise to Stokes’ art on Fishboy, justifiably, but his work on Marney is even more beautiful. Often set in nighttime, or reflecting the changing seasons in the countryside, the images are detailed, haunting and evocative, with Stokes’ characteristic painstaking research bringing our vulpine hero and the other wildlife he encounters to vivid life. Many critics, including Stokes himself, have said that Marney is the best work of his long career, and it is often breathtaking.

But despite the beautiful illustrations, this is not a cosy story.  From Marney’s first appearance, where his mother is shot and his siblings face an even worse fate at the hands of hunters, his existence is one of suffering, mental and physical, of loneliness, a struggle for survival, and a relentless parade of cruelty. The few friends and allies he finds either die or are left behind as he is driven from one lair to another, endlessly seeking respite.

The reader is made privy to Marney’s inner thoughts, narrated with a surprisingly developed vocabulary (better developed than the aforementioned Fishboy, who never quite got the hang of proper nouns during his eight year run!). Goodall’s narrative gives the young orphaned fox a surprisingly rich and detailed internal life, communicated to the reader in a declamatory nihilistic style. Although not a passive fatalist, Marney frequently resigns himself to his fate when the odds seem overwhelming, his melancholy ponderings providing a mordant underscoring of events. A typical Marney soliloquy in a desperate situation:

“The rope bites deep and my limbs grow numb! Here in the chilly darkness, it will be a slow and painful end!”

“This indeed, is the end! First, there will be pain… followed swiftly by eternal darkness!”

Fortunately for the readers’ overwrought sensibilities, Marney was a better narrator than prophet, escaping from multiple life-threatening situations by the merest chance, or by a last-minute act of desperation.

Goodall admitted to taking his inspiration from Tarka the Otter, a 1920s novel by Henry Williamson with an animal protagonist, which had been made into a hugely popular film in 1974.  Watership Down, the famous Richard Adams novel of 1972, was also an influence, and the  synthesis of these two narratives, combined with the cliffhanger nature of British comic traditions – each two-page installment, apart from a couple of ‘breather’ episodes, concluded with Marney in fresh torment or peril – made for a heady ride of anxiety and sorrow. And that was just for the readers!

Over the course of the strip’s nine month run, Marney was variously shot, hunted, burned, drowned, frozen, blinded, poisoned and endlessly attacked by humans and by other animals. I was reading this series in my teens, already ‘too old for comics’ at the time of its release, and while I was fascinated, I was also appalled. Goodness knows what effect it had on the feelings of the 8 to 13 age group it was actually intended for!

But the series didn’t shy away from the harsh realities of life for wild creatures. In one particularly horrifying sequence, Marney has become temporary mentor to a litter of orphaned fox cubs. The boldest of the litter has gotten himself into trouble, and been caught by a farmer;

But it’s a children’s comic, and it’s a cuddly fluffy baby fox, so everything’s got to turn out all right, right? Right?

Although most of Marney’s adventures were reality-based, Goodall’s imagination did add a couple of baroque flourishes, just to mix it up a bit, as some of Marney’s encounters with humans were a bit bizarre. At one point, he’s captured by a band of travellers and forced by the tribe’s matriarch to perform in a circus; in another, what appears to be a kindly benefactor to injured animals reveals a very dark side indeed. ‘Hated man’ is seldom seen in a good light in Marney’s world, but these particular examples are very twisted individuals indeed.

Eventually, Marney ran its course; presumably, after nine months of unrelenting suffering, the readership collectively decided it needed a rest – or therapy! Marney was allowed to find some surcease from his wanderings, in an ending, well, as happy as one could hope for, given the general tone of the story.

It’s a peculiar sidebar in Buster’s history, not a traditional action strip, and certainly nowhere near the comedy for which the title is generally known, but it is of superb quality, and for many years languished in back issue bins, barely remembered and sought after by only the most dedicated readers. 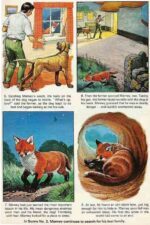 A revised version appeared in the short-lived Sunny, which ran for just nine issues from 1986 to 1987. Sunny being a pre-school/younger readers’ title, the new version, illustrated by Bernard Long, had Marney merely become separated from his family, rather than their being brutally killed, and the savage elements which characterized the Buster run were necessarily curtailed. Sunny was swiftly absorbed by the more established Funtime, but it is not known at this point whether the ‘junior Marney’ continued.

But in 2017, those lovely people at Rebellion Publishing did the right thing. Since, tragically, almost none of the original artwork survives, they computer-enhanced scans from the weekly comics to obtain the best possible images, and collected the Whole. Damn. Series. in one hardcover volume, with a new and sumptuous cover illustration by John Stokes.

It’s a thing of beauty, one of the finest Rebellion re-issues to date, and an engrossing read – though, a word of caution; make sure you’re not out in public when reading it. I  settled down to read my new copy on a long bus-ride home – trust me, you haven’t seen humiliation until you’ve seen a grown man weeping  like a baby on public transport!

Wait till you’ve got it home, settle down with a cup of tea, and have a hanky or two to hand. Accept the word of one who knows.