Dinosaurs? Cowboys? Gladiators? Glory Knight, Time Travel Courier faced them all down, a distaff Doctor Who without all that science stuff… 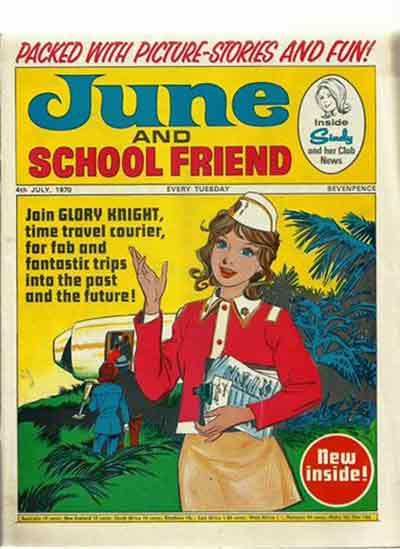 In 1970, the stately girls’ comics weekly June was two-thirds through its life, and settled into a genteel middle age presenting meticulously-crafted but by-the-numbers stories of the same sort of ballerinas, equestriennes, plucky war orphans, schoolgirl adventurers and aspiring models which had served most of its sister papers so well.

Occasionally, June (most commonly remembered as June and School Friend, having merged with a veteran story paper in 1965), would dip a toe into light sci-fi, (usually of the “schoolgirl encounters lass with mysterious powers” variety) in such serials as Serena From Space or Fourth Form Wonder; even then, the perspective from which the story was told remained resolutely mundane, with the incomer being treated as an exotic exception.

But in 1970, J & SF tried out a series which presented the fantastic as the everyday, and while it wasn’t a hit with readers – and is frankly nonsensical as science-fiction – it’s a charming folly, superbly illustrated by John Burns, one of the best-respected craftsmen in the British comics field.

June & School Friend for 4th July 1970 cover-featured Glory Knight, TimeTravel Courier on, the blurb averred, “Fab and Fantastic Trips into the Past and Future!” (A side note for non-British readers; British comics were traditionally issued weekly rather than monthly, and offered up to ten different features, serialized in 1-3 page increments rather than being devoted to a single star series).

Actually, Glory isn’t so much of a Time Travel Courier as a Time Travel Trolley-Dolly /Tour Guide, as the first strip demonstrated, when she ‘s escorting a party of tourists around the Age of Dinosaurs, with the main focus of the story being the elderly Major stereotype’s efforts to ‘bag’ a dinosaur as a trophy.

Apparently in Glory’s version of 1970 Earth (yes, this series is set not in some abstract future, but in the (then) present-day – wonder how many girls formed the impression they could actually be a Time-Travel Courier when they grew up?), hijackings haven’t been a problem, as the Major has been sitting with a loaded rifle on his lap in the time machine, and nobody has expressed any concern. Who’s screening the passengers, Helen Keller Security? 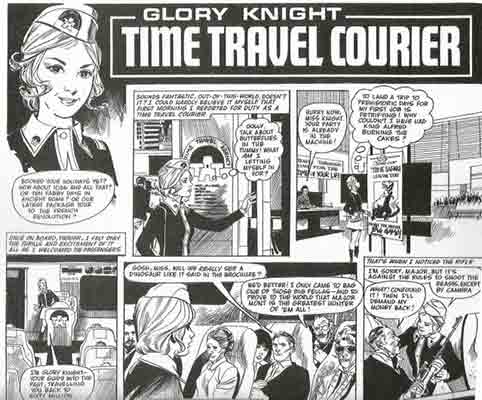 But logic was a lesser concern in Glory’s series – on two occasions, when trapped in the past, she creates a distraction by switching on her transistor radio, which theoretically should have accomplished bugger-all, as in the ancient times she travelled to, there were no stations broadcasting! Still, the series is cheerful nonsense, beautifully illustrated, with Burns injecting an appealing vitality into Glory’s adventures. Our heroine comes across as slightly scatty but good-hearted and , without the benefit of special powers or training, willing to run headlong into jeopardy for the sake of others. Aware of her own deficiencies, she nevertheless gets herself and her charges out of their predicaments without crying, fainting, or looking around for a man to tell her what to do!

The only recurring characters in the series are Glory herself; her former school rival Mandy Price, who eventually befriends Glory and becomes a courier; and the never-named but always menacing ‘Boss’, who constantly questions his wisdom in employing Glory. Despite the Boss’ misgivings, Glory’s serendipitous escapes from problems usually leads to increased prestige for Time-Travel Tours, as she merrily blunders through the aeons.
Glory Knight was somewhat of a change of template for June and School Friend. In the first place, Glory lived alone, and there was never any mention of family. Having a protagonist who was an independent adult was unusual for J & SF – model-girl Sindy aside (and Sindy’s milieu was dictated by the toy manufacturers from whom she was licensed), most of the heroines in the weekly comic tended to be younger girls, closer to the age of the projected readership. And while other light science-fiction concepts had run in the comic, they had almost always, as noted earlier, been variations on the ‘strange visitor’ theme – Glory’s time-travelling background was a bit more expansive than the readership was used to. 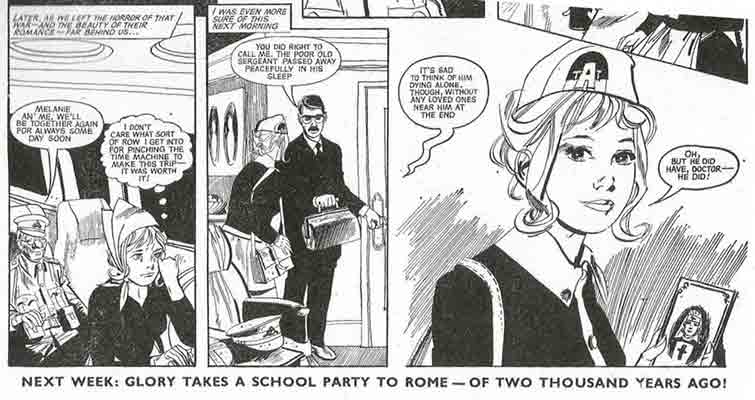 Most of the Glory tales were frivolous, but one, running from 19/9/70 to 3/10/70, introduced a more sombre tone, as Glory, having befriended an elderly neighbour, risks her job by taking the time machine back to World War I so that he can see his lost love, a Nurse, one last time. Touching and melancholy, it was quite a different direction for J & SF’s juvenile audience, more in keeping with the romantic strips written for teenage love weeklies like Romeo or Jackie, which frequently allowed themselves a bittersweet conclusion.

It’s easy to guess how Glory Knight came to be tried out – at the time of Glory’s series, Doctor Who was at one of the peaks of its popularity, scoring high with all demographics including the young females who were June & School Friend’s target audience. The Doctor inevitably had an attractive, well-meaning female assistant who got herself into perilous situations – hell, Glory’s strip might just as well have been called ‘What If Jo Grant Got A Proper Job?’!

Someone at June & School Friend – possibly the then-editor Mavis Miller – was clearly pushing for Glory Knight, as during her short run she got a second cover appearance; by contrast, the luckless Fishboy over in Buster, despite being popular enough to run eight years, got exactly one cover spot during that entire period!

Despite apparent support from ‘head office’, Glory didn’t make it in June and School Friend over the long haul; in total, she appeared in nine stories in the weekly, ranging from four to 14 pages in length, serialised at the rate of two pages per issue. The glamourous time-travel background and striking artwork notwithstanding, Glory’s results in the feedback form published every week must have been disappointing, as she was ditched with at least one complete story unpublished. Her final appearance in June & School Friend was in the 3/4/1971 issue, and the following week, readers were back on safe, tame ground with Call Me Cupid, the story of a school-age girl who solves her older sister’s and friends’ romantic dilemmas.

But the British comics industry was nothing if not thrifty, and little went to waste; with a little cut & paste, the final prepared Glory Knight serial appeared in the June Annual for 1972. (Again, a sidebar for non-UK readers; most weekly comics produced a special Annual for the lucrative Christmas market. Hardcover and ranging from 100-200 pages, these featured a mash-up of reprints (sometimes from other publications entirely), newly-commissioned material and unused inventory.)
In her swan song, Glory went back to the times of Sherwood Forest, was wooed by Robin Hood, defeated Richard the First in combat – more by luck than judgement – and avoided the venomous Maid Marian, in a 6-page romp that was a charming coda to the series. 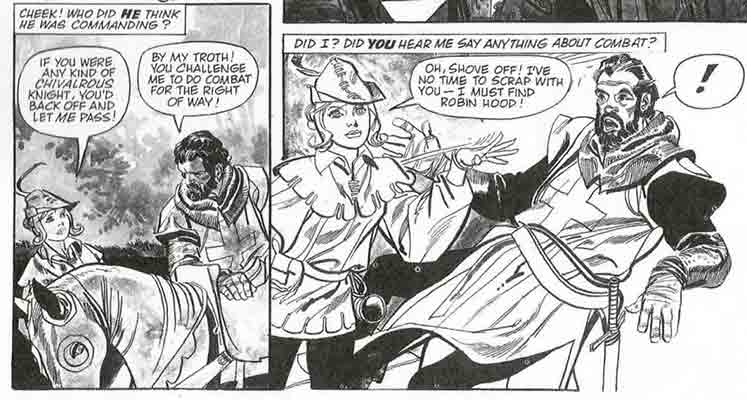 These stories are never going to be collected in reprint editions – not a hit at the time of her publication, Glory Knight is nowadays largely unremembered. But should you encounter her in the musty shelves of a crumbly old bookstore, do give her a look; she rewards attention.

1) June & School Friend 4/7/70-11/7/70; We meet Glory for the first time, as she escorts tourists to the Age of Dinosaurs, but the tour is cut short when Major Mott’s trophy-hunting nearly brings disaster on the party.

3) 8/8/70- 15/8/70; Mandy’s interference lands the girls in a strange and inhumane future, and they nearly lose the Time Machine, their sole hope of returning.

5) 19/9/70 – 3/10/70; Having befriended an elderly neighbour, World War I veteran Sergeant Perry, Glory smuggles him into the Time Machine for an unauthorised trip to the past, and a reunion with his lost sweetheart.

7) 31/10/70 – 14/11/70; Efficiency expert Sybil Floyd audits one of Glory’s trips to sixteenth-century Florence – but a handsome hijacker instead takes them to the Tower of London, and tries to emulate Guy Fawkes by blowing up Parliament!

8) 30/1/71 – 13/2/71; Glory’s rival Mandy is now a fully-fledged courier. On a holiday trip to the Wild West, Glory encounters reclusive homesteader Ely Gideon and his invalid daughter.

9) 20/2/71- 3/4/71; The final Glory Knight serial is the longest, as she takes her boss’ daughter and her new husband on a honeymoon trip to the Old Spanish Main, where they meet the pirate, Captain Billy Bundle, and narrowly avoid being forced to walk the plank; as they make their escape, Captain Billy stows away, and wreaks havoc in the present day of 1970!

10) June Annual, 1972; After a schoolboy steals Robin Hood’s horn, Glory is sent back to Sherwood Forest to return it, encountering a more amorous Robin Hood – and a more shrewish Maid Marian – than the history books ever told her about.