Undeservingly forgotten, the Butterfly was the first black woman to join the ‘panties & capes’ party of the Super-Folks. 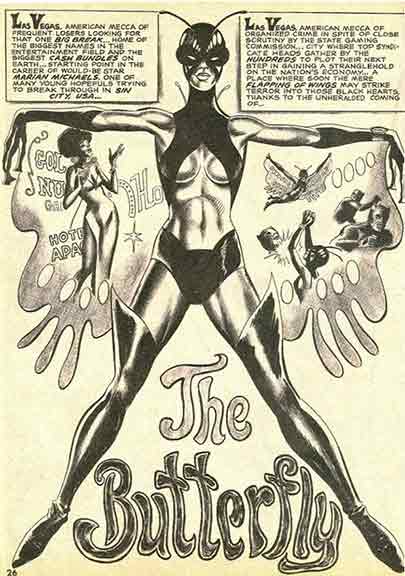 With the recent flood of announced Marvel movies in development, attention is being paid to the company’s properties. Prominent among these is the Black Panther, who, when mentioned in news releases to the general public, is inevitably tagged as “the first black super-hero in comics”.

Which got me wondering – who was the first black super-heroine in comics?

Not the first black heroine in comics – since the 1930’s, Jackie Ormes’ Torchy Brown had been a syndicated newspaper strip, and Friday Foster, photographer and supermodel, hit the funny pages in 1970 – but the first black woman to go the whole super-powers, secret-identity, fighting-crime routine.

Most people would guess Storm of the X-Men, certainly the best-known, who made her debut in May 1975. Animation fans might offer Teen Titans’ Bumblebee, who actually gets the bronze medal, having premiered in June 1977. But the lady who edges out both these femmes formidables for the title is an obscure character from a publisher generally dismissed as a shlock-slinger, the comic-book equivalent of a grindhouse movie studio. 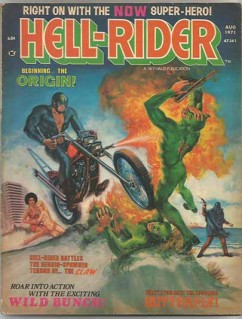 The first woman of colour to join the panties-and-capes crowd was the Butterfly, from Skywald Publishing in August 1971, a back-up feature in the two & only issues of Skywald’s attempt at a ‘mature readers’ super-hero magazine, Hell-Rider.

Skywald was the property of Sol Brodsky and Israel Waldman, shamelessly piggybacking on the success of Warren’s non-code approved horror magazines, Creepy and Eerie, which, being black & white mags aimed at an adult audience, could present horror comic stories without the censorious interference of the Comics Code Authority. Brodsky & Waldman muscled in with 1970’s Nightmare, shortly followed by Psycho. Waldman had had experience of recycling old stories with his IW/Super Comics line of 1959-1964, and he brought it to play here, filling pages with edited reprints of Pre-Code horror stories, and a minimum of new material.

As sales climbed, Skywald phased out the reprints, and looked for other genres to exploit. Their attempt at a ‘now’ super-hero was 1971’s Hell-Rider, a Vietnam veteran who gained super-strength as a result of an experimental serum, but faced the inconvenience of intermittent powers which came and went as the plot demanded. Back-ups in Hell-Rider were “The Wild Bunch”, a mish-mash of biker stereotypes who did bad things for fundamentally good reasons, and, finally, the lady who’s the subject of this article – “The Butterfly”.

In fact, the stories in Hell-Rider # 1 constitute one four-chapter serial, as in turn, Hell-Rider, the Butterfly, and the Wild Bunch, all encounter the same villainous organization – a group of costumed cultists-slash-drug-distributors named The Claw, who are raising funds for a mercenary army to take over America – before passing the ball back to Hell-Rider for wrap up in the final chapter. 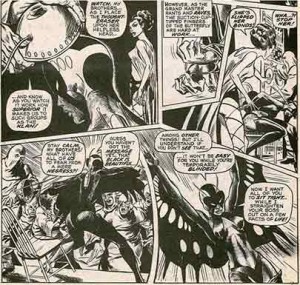 In her chapter, cabaret singer Marian Michaels dons a costume that’s considerably more abbreviated than the Comics Code would have permitted at the time, consisting of a bikini, thigh-boots, mask, gloves and butterfly wings. A jet-pack concealed by the wings is what actually enables her to fly, but the wings have more than just a decorative purpose, dazzling her opponents on command with a powerful kaleidoscopic light. The gloves also had suction pads on the fingertips which enable her to cling to smooth surfaces.

How she acquired all this garish gear is never revealed. At one point, our heroine thinks to herself, “This is no time for origin stories!”, and that, plus a brief reference to having ‘found’ the flight-pack, is all we get. We’re presented with the Butterfly as an already-established crimefighter, and her origin – as well as a previous team-up with Hell-Rider which is mentioned in passing – would doubtless have been told had the character had a few more appearances. In her first recorded adventure, she performs creditably, holding her own when outnumbered and outgunned, even though the necessity of the plot to hand over to the next chapter means she doesn’t really accomplish a great deal; but her second story, and her only true solo, is really rather good, cramming a lot into its 11 pages. 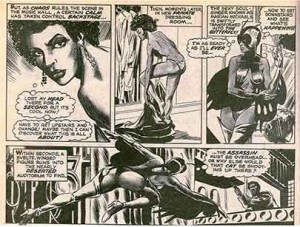 In “The Butterfly Against the Brothers of the Crimson Cross”, when an assassination attempt is made on a senator at one of Marian Michael’s concerts, we are introduced to Tony Morris, FBI special investigator, clearly intended as a romantic interest for Marian. Sparks fly as both Tony and the Butterfly investigate the Crimson Cross, a nefarious organization whose mission is the total eradication of non-white races in America. This they propose to do by brainwashing influential black citizens and have them do the race-hatred rabble-rousing against whites, thereby making it look like violent retaliation and suppression of non-whites would be ‘justified’. As domination plots go, it’s a tad oblique, but at least has a tinge of originality, and given that Black Power and racial struggles were very much in the headlines of the early 1970’s, no-one can accuse scripter ‘Groovy’ Gary Friedrich of being oblivious to the issues. Marian’s Las Vegas setting, too, offered the chance for some interesting locales, and a change of pace from the mainstream heroes from Marvel and DC, who were either set firmly in Manhattan or in fictional cities. 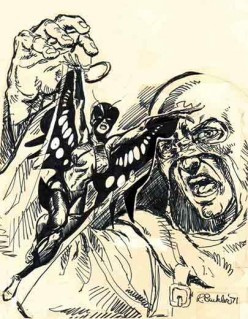 In both stories, Marian is presented as a cool-headed lady, courageous but not reckless, swift to go to the defense of others. Despite this being the era of ‘blaxploitation’, there’s no slangy, ghetto dialogue, no inner-city upbringing clichés, and she’s positive and confident, carrying out her actions without crying, fainting or looking around for a man to tell her what to do.

True, the costume isn’t exactly conservative – Rich Buckler and Syd Shores, in the second story particularly, seem keen to show us exactly how it fits her rear-end, in as many panels as they can manage – but that can be rationalized by the fact that she’s based in Vegas, where skimpy costumes are commonplace, and the desert environment doesn’t require wrapping up warm! Generally, the two Butterfly tales are fast-paced, well-told, and with a likeable lead character whom it would have been nice to see again.

Sadly, Hell-Rider didn’t take off, and the second issue was the last. Except for a walk-on in 1990’s World’s Worst Comics Awards #1, where she was somewhat unkindly nominated for Worst Female Costume, the Butterfly’s career was over. 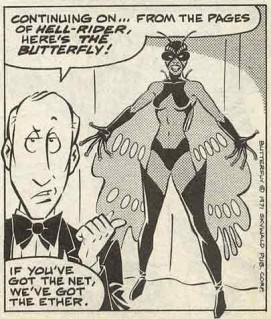 Even so, a rough sketch by Buckler, dated 1971, surfaced several years ago. Showing the Butterfly leaping into action, with the head of the Crimson Cross looming in the background, this may have a been a cover rough for Skywald’s short-lived colour line, which used a mixture of new and reprinted material.

If this had happened, not only would she have been the first black super-heroine to get her own book, by decades, (Storm didn’t get her first mini-series till 1996), but we would finally have a clue what the costume looked like in colour, since her only appearances were in black & white! Sadly, it was not to be, and the Butterfly remains an unjustly-forgotten milestone in comics history.