Will wrote this article when 30th Century Comics bought Steve’s collection, to explain why they were so special. Although much of Steve’s collection has now found new owners, you may still find some comics marked as ‘Whitko Collection’ in your order.

Steve Whitaker, one of the mos 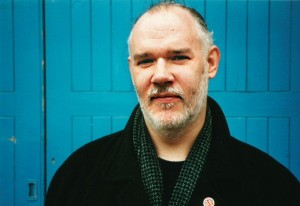 t gifted people in comics that you’ve probably never heard of, died on February 22nd, 2008, of a suspected stroke, at the age of 52.

His most famous work is his colouring on Alan Moore’s V For Vendetta, but Steve’s influence reached much further than his published credits, which included Marvel (UK & US), DC Comics, Fleetway, Tundra, and Valiant.
His achievements as an illustrator remain largely unknown, owing to his self-critical perfectionism (when I shared a flat with him in the 1990s, I regularly rescued discarded sketches from under the coffee table!) and his, shall we say, unorthodox attitudes to deadlines. He never prioritised the business of making a living; he was always too busy living.

He was one of the most formidable repositories of comics knowledge in the world, and I’m also very proud that he was one of my closest friends. Whenever I’m asked a question I can’t answer about comics, my first thought is still “I bet Steve will know that” – forgetting, momentarily, that I won’t be in a position to ask him for a while…

Recently, 30th Century Comics has acquired Steve’s collection, and because of its diversity and uniqueness, we’ve decided to offer it as a ‘pedigree’ collection, one that’s derived from one specific source. In tribute to Steve’s nickname (from his admiration for Steve Ditko’s work), we’re calling it ‘The Whitko Collection’.

With many pedigree collections, emphasis is placed on the near-pristine condition of the items. Steve’s isn’t like that. His was the collection of a working artist, not bought for investment or ‘collectability’, but read for enjoyment and for reference time and time again. Many of them are decent, but as many are worn, torn, taped, stained, and often annotated in the margins with Steve’s identification of artists.

Steve’s tastes were very diverse; he took as much joy in discussing the influence of Jack Kirby’s 1971 departure from Marvel Comics as he did coming up with new members for the Space Canine Patrol Agents! (Jiu-Jitsu Shih-Tzu was a particular favourite…) This variety is reflected in the breadth of his collection; Ditko, Kirby, Dell, Atlas, Archie, Charlton, American, British, Western, War, Magazines About Comics, Romance, IW/Super, Religious, Funny Girls, and much more.

Selections from ‘The Whitko Collection’ will be added to our website catalogue on a weekly basis from now throughout 2010, as we work our way through grading and processing them. Each ‘release’ of issues will be announced on our ‘What’s New’ page as they become available for sale. Steve’s collection numbers many thousands of vintage items, including very many rarities and oddities as well as more classic Golden, Silver and Bronze Age titles. Every single category in our catalogue, both British and American, is represented within this collection and there will be several updates for each category, so, for example, if you see a Dell Comics update, it doesn’t mean that’s all there is of Dell, just the first batch of them.

Most pedigree collections are also characterised by an enhanced premium on the retail price. That’s not applicable in this case. All items in ‘The Whitko Collection’ will be sold at our regular retail, to be bought by people who’ll enjoy and appreciate them. Which – apart from still being around to enjoy them himself, of course – is what I think he would have wanted.