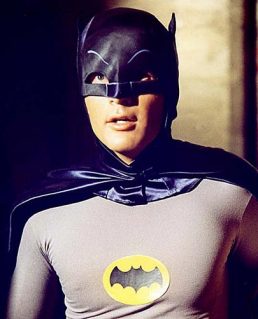 We were greatly saddened to hear today of the death of Adam West. 30th Century’s Rob Rudderham writes:
‘When I was a lad, we didn’t have much in the way of comic book TV shows and films (as you young people do now!), so when I heard of the upcoming Batman TV show in 1966, I remember being very excited. I used to settle down to watch it (with a packet of crisps as a special treat) twice a week and thrill to the exploits of Batman & Robin as they came up against a whole gallery of dastardly rogues. But the young me, I fear, felt that the series was spoilt because it didn’t take itself seriously – for all the joy of seeing my heroes on TV, I didn’t like the campy antics they got up to.
‘Watching in later years, my attitude changed entirely and it was the very nature of the comedy of the show that endeared it to me. No more was this typified than in the performance of Adam West in the lead role, whose timing and line delivery was so funny because he appeared to be playing it absolutely straight. The years went by, and it seemed those three series of Batman (and the one film) were never far from our TV screens. Adam remained associated with it for the rest of his life, in books, voicing Batman in animated features, and in the recent DC Batman 66 comic series celebrating the show.
‘For me, and I suspect for a whole generation, the best Batman ever. He will carry on dancing the Batusi and sliding down the Bat Poles every time I watch an episode, which I intend to do frequently. I may even treat myself to a packet of crisps, and I’ll never be disappointed again.’