In 2017 we reported on the sad loss of Alan, a mainstay of the comic and book dealing worlds. Alan (AKA the Guv’nor) was one of the most respected figures in UK comic book fandom who did much to inspire and enthuse many others in the field.

He was the first full-time comics dealer in the UK, and published many fanzines about American comic books throughout the 1970s and into the 1980s, including Fantasy Unlimited (later Comics Unlimited), the first Comic Book Price Guide for Great Britain, the Golden Age fanzine and the DC and Marvel Comics Indexes.

It fell to his friend Nigel Brown to edit and publish two of his works, firstly a book about comics (Comics Unlimited: My life as a Comic Collector and Dealer) and secondly a collection of short stories (The Adventures of Bernie Burrows, Bookseller) loosely based on his own book dealing experiences.

Both are now available as paperbacks or ebooks from Amazon. We’ve included the synopsis of each book below.

Comics Unlimited: My life as a Comic Collector and Dealer 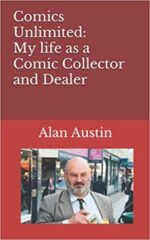 This book details Alan’s life in comics, and his experiences as a comic collector and dealer from the early days of comic book fandom, beginning in the 1960s.

The Adventures of Bernie Burrows, Bookseller 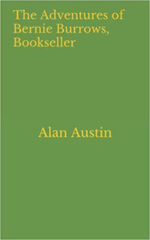 Bernie Burrows is a reader, collector, and seller of books.

His world is populated by people struggling through the calamities of life, as is Bernie himself. But Bernie doggedly pursues his vocation despite growing competition from other bookdealers and websites, and an increasingly difficult public.

Join Bernie as he risks a late night opening of his bookshop in the hope of ‘the big sale’, encounters the phantom book-leaver, faces a life-or-death locked room mystery he has to solve, sets off on an expedition across the streets of Chicago in search of dust-jacketed treasure, and many more adventures.

We can heartily recommend both books. Alan was an entertaining writer and his acerbic wit shines through in everything he did. These serve as a testament to his memory and a reminder of how much the comic and book worlds miss him.