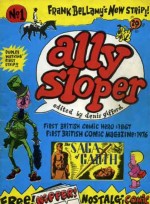 In 1976, Alan Class joined forces with the foremost collector and historian of British comics, Denis Gifford to revive the character generally regarded as the first British comics character Ally Sloper. Ally Sloper was a blustery, lazy, scheming ne’er-do-well who debuted in 1867 in Judy, a ‘companion’ paper to Punch. The revival was sadly short-lived, lasting only 4 issues, despite boasting the cream of British artistic talent of the time, headlined by Frank Bellamy.

To launch the series, a party was held on a boat on the Thames, with many artists attending. There was a commemorative board and a large promotional board which many of the comics’ artists adorned with their rendition of Ally Sloper.


Attendees included (left to right below, showing details of their Ally Sloper renditions): Denis Gifford, Hunt Emerson, Kevin O’Neill (faint on reverse of board), Ann Spano , Ed McHenry and many others.

On June 7th at our Alan Class signing session, these promotional boards will be on display and available (as a single lot, together with a copy of Ally Sloper #1) to the highest bidder. Simply contact us before 4 pm on June 7th with your bid (or make a bid on the day if you’re attending) and the best offer will win. Please note that the boards are too big to be posted and MUST be collected and taken away from our shop on June 7th (or within one week thereafter); you’ll need a car to take them, as they’ll be too large for public transport.