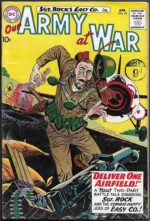 *War: Sgt Rock’s Easy Company had a more varied and numerous line-up than their Marvel equivalents the Howling Commandos, and they were introduced mostly one at a time over a long period. Issue #93 of Our Army At War saw the introduction of bazooka man Zack Nolan, who was later replaced after he lost an arm in combat. A nice bright pence stamped copy from 1960, a little worn but without specific defects. Great Joe Kubert art.
PICTURED: OUR ARMY AT WAR #93 VG p £52