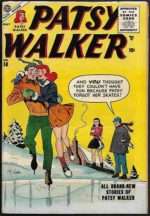 *Teen Humour/Funny Girls: Continuing our mammoth restock of Timely/Atlas/Marvel’s premier teen humour title, we move from 1954’s #54 all the way through to the series’ final issue, #124 in 1965, a period which saw great changes for our heroine, as she grew up, graduated and became a career girl as her series’ emphasis shifted from funny stuff to soap opera romance – though, of course, the biggest change for Patsy was when she became the super-heroic Hellcat, but that was a decade later in the Avengers! These 50 issues of Patsy’s solo series also include guest appearances by Millie the Model and Linda Carter, Student Nurse – who said the super-hero books invented crossover stories? (Shame Sue Storm or Janet Van Dyne never visited Centerville, mind…)
PICTURED: PATSY WALKER #58 FN £18