*IW/Super: I.W. Publications was a short-lived comic book publisher in the late 1950s and early 1960s, named for the company’s owner Israel Waldman. Comics were published under both the IW and Super imprints and were notable for publishing unauthorized Golden Age reprints of other company’s properties. Usually these companies were out of business, but not always. Basically, it seemed to be whatever they could get their hands on that determined the esoteric nature of their output. Thus you get super-heroes, war, romance, western, funny animals, crime, horror, science fiction and just about every genre within their pages — and we’ve got lots of all of ’em this update, with several new issues added to our catalogue for the following titles: Danger Is Our Business, Daring Adventures, Dream Of Love, Fantastic Adventures, Firehair, Frontier Romances, Jungle Adventures, Jungle Comics, Love And Marriage, Romantic Love, Mystery Tales, Plastic Man, U.S. Fighting Air Force & U.S. Fighting Men.  A great way to sample Golden Age material at a fraction of the price of the originals.
PICTURED:
DANGER IS OUR BUSINESS #9 FN £19.50 SOLD
DARING ADVENTURES #12 App FN £11 SOLD
DREAM OF LOVE #1 FN+ £8.50
JUNGLE COMICS #9 FN- £7 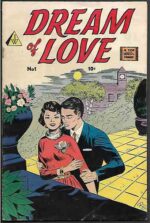