*Miscellaneous 1960 Onwards: A large top-up to our stock of Atlas Seaboard comics published in 1975. In the 1980s and 1990s, new universes were quite commonplace (Valiant, Ultraverse, Defaint etc), but back in 1975 a whole new comic group launch competing with DC & Marvel was quite a bold and innovative move. Sadly, this project helmed by Marvel’s founder Martin Goodman was doomed to failure, and none of the 28 comic and magazine titles lasted more than 4 issues, despite having stellar names involved such as Wood, Ditko, Chaykin, Adams, Heath, Severin, Toth and more. But in 2019 a new Atlas company was formed amid rumours of movie franchise options from 2021 onwards. A bumper selection of Atlas Seaboard titles new in this week, including the Brute, the Destructor, the Grim Ghost, Ironjaw, Moorlock 2001, Phoenix, Planet Of Vampires, Tiger-Man and Wulf the Barbarian, many #1 issues among them. See our catalogue for our full listings of all our Atlas Seaboard stock.
PICTURED:
DESTRUCTOR #1 VF £10.75 SOLD
GRIM GHOST #1 FN P £4.75 SOLD
IRONJAW #1 VF/NM p £16.25 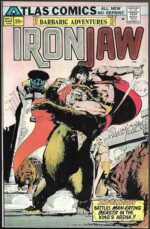