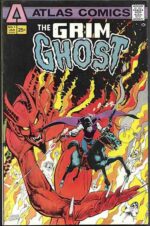 *Miscellaneous 1960 Onwards: A chunky top-up to our stock of Atlas Seaboard comics published in 1975. In the 1980s and 1990s, new universes were quite commonplace (Valiant, Ultraverse, Defiant etc), but back in 1975 a whole new comic group launch competing with DC & Marvel was quite a bold and innovative move. Sadly, this project helmed by Marvel’s founder Martin Goodman was doomed to failure, and none of the 28 comic and magazine titles lasted more than 4 issues, despite having stellar names involved such as Wood, Ditko, Chaykin, Adams, Heath, Severin, Toth and more. A nice selection of Atlas Seaboard titles new in this week, including the Destructor, the Grim Ghost, Morlock 2001, Phoenix, Planet Of Vampires and Weird Suspense (featuring the Tarantula), many #1 issues among them. See our catalogue for our full listings of all our Atlas Seaboard stock.
PICTURED:
GRIM GHOST #1 FN+ p £6
PLANET OF VAMPIRES #1 VF p £11.75