*Miscellaneous 1940-1959: It’s a thing, isn’t it? Girls menaced by robots in the Golden Age. One only has to think of the classic advertising posters for the Forbidden Planet movie to see the iconography of this type of image. Planet Comics #70, Robotmen of the Lost Planet, countless others. Perhaps the most famous of these is Nedor’s Startling Comics #49 by Alex Schomburg. Whilst the prices on this have risen stratospherically out of reach for the average collector, the lesser known Brick Bradford #6 from King Features in 1948 provides a relatively more affordable alternative. Brick Bradford is a space adventurer in the mould of Flash Gordon, with his adventures more than competently illustrated by Clarence Gray. But it’s the cover of #6 that’s the big selling point. Drawn by Alex Schomburg, a typical Schomburg robot menaces our heroine, with Brick there to save the day. This is a superb copy for a comic published in 1948, with vivid colour, flat with tight staples, great page quality and only very minimal wear. What looks like an arrival date is pencilled near the robot’s head and a faint trace of a non-colour breaking crease can just be made out close to the right bottom edge. There is a very small scuff at the top of the spine, but this hardly shows against the yellow background. I doubt there’s many better copies in existence. High resolution images are available on request.
PICTURED: BRICK BRADFORD #6 FN- £750 SOLD 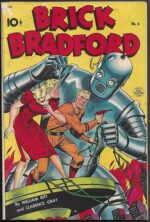