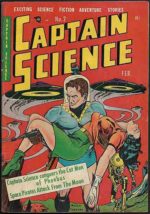 *Miscellaneous 1940-1959: Launched in 1950, Captain Science, aka Gordon Dane, was a sci-fi hero in the vein of Buck Rogers who fought all manner of outer space villains including flying saucers, monster gods, alien warriors, and even domestic traitors, with the help of his young assistant Rip Gary (a name, not an instruction!) and his shapely Gal Friday Luana, who favoured the ever so practical bra-n’-panties-under-cellophane-‘spacesuit’ ensemble so beloved of pulp sci-fi heroines – or at least by their illustrators! Since one of said illustrators was the fabulous Wally Wood, what ought to have looked cheesy and exploitative, mind, often looked sophisticated and glamourous. The intrepid trio faced down the Cat Men of Phobos, the Space Pirates of Lenthus IV, the Deadly Dwarfs of Deimos, the Martian Slavers, and the Insidious Doctor Khartoum, among others, while in the back-up pages, interplanetary private eye Brant Craig battled space crooks while sporting a rather silly-looking ‘Thunderbirds’ titfer. These are very lovely and highly sought-after issues, seldom seen on the market, and we’re lucky to have attained a complete run of Captain Science, #1-7. #1 has its spine glued and rebuilt, extra staples removed and a right edge microtrim. #3 has extreme spine wear (and a shameless cover swipe from Wings Comics!). #4 has its cover detached from both staples. #5, by contrast, has extra staples reinforcing the original ones and #6 has moderate spine wear. Wally Wood’s art graces #1,# 4 & #5. With issue #8, it morphed into a more general SF series, Fantastic, though the Captain continued to appear for a while.
PICTURED: CAPTAIN SCIENCE
#1 App. VG+ £100 SOLD
#2 VG/FN £125 SOLD
#3 GD- £75 SOLD
#4 FA+ £75
#5 GD/VG £125 SOLD
#6 FN £300 SOLD
#7 GD £125 SOLD