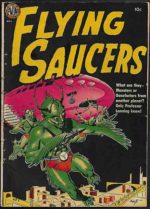 *Miscellaneous 1940-1959: In 1950, Avon Comics released the one-shot Flying Saucers, tapping into the popular obsession with UFOs with the story of daring explorer Ross Lanning unwittingly unleashing upon the Earth an extraterrestrial invasion which may one day destroy us all! (Spoiler alert: not yet.) Drawn by the superlative Wally Wood; even at this early stage in his career Wood’s art, though less polished than it would become, carries the reader through the chapters of this fast-paced narrative which would have made a great classic sci-fi movie. This is the second printing (dated 1952) of this hard-to-find cult item, in a nice solid VG with the all-black cover background virtually unmarred apart from a few tiny breaks at the staple areas.
PICTURED: FLYING SAUCERS 2ND EDITION (1952) VG £110