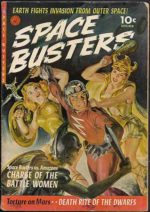 *Miscellaneous 1940-1959: Running only two issues from Ziff-Davis in 1952, Space Busters was a virtual clone of another Ziff-Davis publication, Space Patrol, which was based on a children’s television show. Guardians of Earth, the Space Busters, led by Commander Senstral, tackle the Empress of Belzar and her armies, who have established a beachhead on Mars – but is all as it seems? Captain Brett Crockett thinks not! These rollicking space opera adventures are illustrated by the legendary Bernie Krigstein in issue #1, and the superb Murphy Anderson in issue #2, with painted covers by Norman Saunders and Allen Anderson respectively.
PICTURED: SPACE BUSTERS
#1 VG £140
#2 FN £200 SOLD