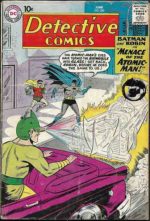 *DC: In 1960, costumed villains were unusual in the Bat-Books, the editorial preference being for aliens, monsters and robots rather than straight-up crooks, so the debut of the matter-manipulating Atomic Man was a welcome change, even if the Dynamic Duo did seem a bit outclassed by the transmuting terror. Fortunately, despite his averred scientific prowess, Atomic Man didn’t have much in the way of common sense, and Batman and Robin were able to outsmart their powerful opponent, who surprisingly hasn’t made a return appearance yet – possibly because of his outstandingly ugly costume! Backed up by tales of Roy Raymond TV Detective and J’onn J’onzz, the Martian Manhunter, this copy of Detective #280 is VG, with moderate corner and edge wear and a few very small light stains on the upper back cover.
PICTURED: DETECTIVE COMICS #280 VG p £50