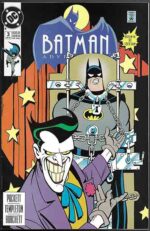 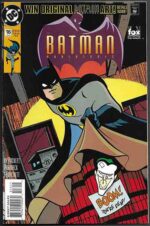 *DC: From 1992, the first (and by far the best) series based on the Batman TV Animated series. Delightfully adapting the TV cartoon style, the series matched the intelligence, humour and charm of the TV show, especially when rendered by the superb pencils of the late and much missed Mike Parobeck, who really found his calling with this style. Of course, it was the series that give birth to Harley Quinn, and although her issues are not included in this update, we do have most of the 36 issue series new in, including #3 & #16 with covers and stories featuring the Joker.
PICTURED: BATMAN ADVENTURES
#3 VF+ £20
#16 VF/NM £20