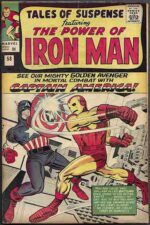 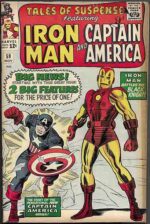 *Marvel: In Tales Of Suspense #58, Iron Man and Captain America were ‘in mortal combat’ (as a result of the machinations of Kraven the Hunter and the Chameleon, who had hopped over from Amazing Spider-Man). And in #59, Cap joined the title with the beginning of his own series, and an encounter with a gang of mobsters in a story which also featured the introduction of Jarvis, the Avengers butler. Iron Man meanwhile comes up against the Black Knight. With artwork by Don Heck and Jack Kirby, and guest shots from their fellow Assemblers, these are almost like reading early issues of the Avengers.
PICTURED: TALES OF SUSPENSE
#58 VG- p £135 Pence printed, structurally sound but for a little fragility at front top edge with tiny chip out (similar at back but unaligned). Good spine, tight staples, small signs of wear at edges. Unspoilt cover image. Inner covers are moderately tanned, turning to heavy at edges, but not brittle. Pages are a decent off-white. Faint hint of a subscription crease down top half of front cover barely shows and only breaks colour for a couple of cms into logo.
#59 GD/VG p £115 Pence stamped and structurally sound with good solid spine, tight staples and only minor edge wear. Cover has good colour and some gloss. Nice off-white to cream pages. The comic is marred by a long dust shadow down the right hand edge (see scan). Inner covers are heavily tanned at edges, but not brittle.