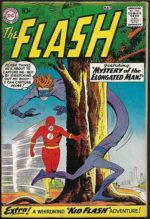 *DC: Four early issues of Barry Allen, the Silver Age Flash, from near the beginning of his career! Having relaunched with #105, continuing the numbering of the 1940s Flash Comics, issue #110 saw the double debut of Wally West, Kid Flash, the super-fast youth who would one day take over the mantle of the Flash himself, and of the Weather Wizard, the climate-changing crook who would be an integral part of Flash’s Rogue’s Gallery! A couple of issues later, the Vizier of Velocity encountered the Stretchable Sleuth – Ralph Dibny, the Elongated Man! Ralph became a character who broke all the super-hero rules of the day; he rapidly abandoned any pretence at a secret identity, he married early during an age of bachelor heroes, and he and his wife Sue became the Nick and Nora Charles of the super-set, solving crimes with charm and wit. All that was in the future, of course – but it started here! Both our #110 and #112 are graded FA+: the #110 has an approx. 2″ lower spine split, and moderate corner and spine wear, but is clean and sound with an unimpaired cover image. The #112 has vivid cover colour, excellent page quality, with only a tiny strip of colour fading (less than 1mm) at the top cover edge, and rusty staples. In addition, we have two other issues from the early days of UK distribution: #111, ‘Invasion of the Cloud Creatures!’, and #115, another in DC’s seemingly endless parade of ‘fat heroes are funny’ covers, ‘The Day Flash Weighed 1,000 Pounds!’ All magnificent work from John Broome, Carmine Infantino, Murphy Anderson and Joe Giella.
PICTURED: FLASH
#110 FA+ p £150 SOLD
#112 FA+ p £70 SOLD