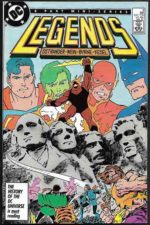 *DC: DC’s 1987 company-wide crossover Legends introduced a fistful of new concepts they were generating post- Crisis On Infinite Earths. Issue #1 saw the first appearance of the formidable Amanda Waller, and the final issue #6 saw the introduction of the ‘new’ Justice League, as manifested in their own series by Giffen, DeMatteis and Maguire. The later breakout issue of this series, however, was #3, which brought in the most successful version to date of the Suicide Squad, under the direction of the aforementioned Ms. Waller. While the name ‘Suicide Squad’ had been used twice in the DCU before – once for a team of non-superpowered adventurers in Brave & Bold, and once for a series of stories in the war titles, this was the one which caught on. Unwillingly reformed super-villains, the team took on insanely hazardous missions with the dangling promise of freedom if they earned enough ‘time’ off their sentences – or the alternative of a swift and brutal death at the hands of their governmental captors if they crossed the line. A massive hit, this Suicide Squad spun off into several acclaimed series, and of course, a flawed-but successful major film release in 2016. This entire 6 issue set of Legends is NM pence copies.
PICTURED: LEGENDS #3 (COMPLETE SET OF 6 NM £50) SOLD