↓
Home→What's New→American Update: DC Debuts: Son of a Preacher Man: Preacher #1 from Vertigo back in stock 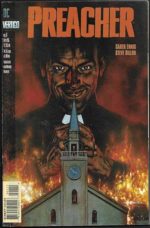 *DC: Another more ‘modern’ addition to our listings is Preacher #1 from DC’s Vertigo imprint. A mere 23 years ago, Garth Ennis and Steve Dillon brought us the tale of the eponymous Preacher, Jesse Custer, who travels across America on a mission to track down God with the assistance of his gorgeous hitwoman girlfriend and his best friend, an Irish vampire. As you do. Sexist, racist, violent, twisted, homophobic, misogynist and thoroughly, thoroughly blasphemous, Preacher was also intelligent, viciously insightful, and outrageously funny. Lasting 66 issues and a handful of Specials, Preacher broke boundaries and won both acclaim and controversy in abundance. Recently made into a TV show which has attracted a cult following, readers should be advised that the TV series is restrained and discreet compared to the original comic! No, really.
PICTURED: PREACHER #1 FN p £45