*DC: Now we’re straying dangerously close here to my all-time favourite comics! Absolutely delighted to bring you all 6 parts of the Zatanna’s Search storyline – a crossover story arc before there were such things — commonplace now but unheard of in 1964! A particularly timely update bearing in mind strong movie rumours! Zatanna is the daughter of DC’s Golden Age magician Zatara, first appearing in Hawkman #4 and taking her search for her missing father through the pages of Green Lantern, Atom, Detective Comics and the Justice League of America. Our latest copy of Hawkman #4 is an apparent VG-, pence stamped, with a good colour cover image, tight staples and decent pages. There is some edge wear, particularly to the spine, and some colour-breaking creases to the bottom right corner. We use the term ‘apparent’ because the right edge looks a little narrower than it should, suggesting a trim, although the wear at that edge would seem to contradict that. Nevertheless, we have priced it as if it was trimmed. The remaining five parts are shown below in order (completists should note that Zatanna only appears in disguise in Detective Comics #336, retconned into the Batman story, as we found out in JLA #51, in order to get Batman into that issue).
PICTURED:
HAWKMAN #4 App VG- p £140 1 of 6 SOLD
DETECTIVE COMICS #336 GD/VG £18.50 2 of 6
ATOM #19 FN- p £95 3 of 6
GREEN LANTERN #42 VG+ p £30 4 of 6
DETECTIVE COMICS #355 FA p £8.25 5 of 6
JUSTICE LEAGUE OF AMERICA #51 FN/VF p £60 6 of 6 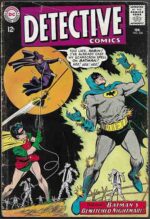 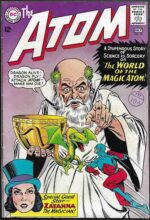 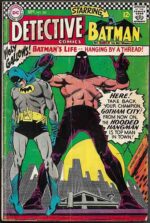 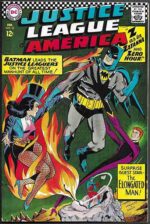