*DC: In the May 1959 issue of their flagship title, Action Comics #252, DC introduced another survivor from Krypton, Superman’s cousin Kara Zor-El, who called herself Supergirl. She would go on to become a prominent member of the DCU, until killed off in Crisis on Infinite Earths in 1985. Since then, she has appeared in a number of iterations too numerous to go into here. Suffice it to say that Kara remains a firm fan favourite character and one of DC’s mainstays. This is the first copy of her origin story we have had in stock for a very long time. This is the beginning of Supergirl’s regular strip in Action Comics, and there’s also a Congorilla story and a Superman story featuring the first appearance of Metallo; what a landmark issue! It’s a lower to mid-grade copy, pre-distribution so cents of course. The cover image is bright and colourful and the comic presents reasonably well, with firm staples and decent cream coloured pages. Although the central cover image is unmarked, there are signs of reading wear at central right edge in the form of (probably) finger marks leading to smudgy creases which break colour over the tail fins of Supergirl’s rocket (see scan). The other significant flaw is a lower spine split of about 4 cm which extends throughout the pages to lesser degrees. Nevertheless, a good-looking copy of a major key issue which would be beyond a lot of collectors’ budgets if in much higher grade. High resolution images are available on request.
PICTURED: ACTION COMICS #252 GD/VG £1,275 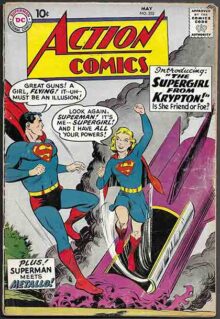 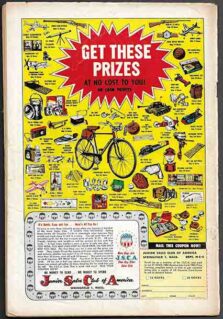 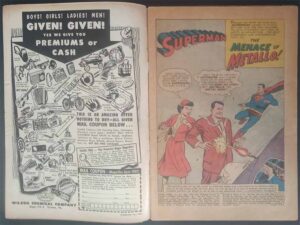