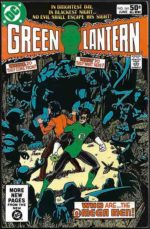 *DC: Following his debut in Green Lantern #59, in what was effectively an ‘Imaginary Story’ (though the editors didn’t call it that), Guy Gardner returned unexpectedly to the DCU in Green Lantern #116, substituting for an incapacitated Hal Jordan, and kicking off the lengthy string of appearances which led to his own series in the 1990s, as well as a lengthy term in the latter-day Justice League. Green Lantern #141, meanwhile saw the appearance of a coterie of outer-space rebels and heroes who would go on to greater things as the Omega Men. Both these latter-day milestones are back in stock; the GL 116 is VG p, light to moderate wear and with one faint book centre stamp on the cover, while #141 is a desirable VF/NM cents copy.
PICTURED: GREEN LANTERN
#116 VG p £20 SOLD
#141 VF/NM £30