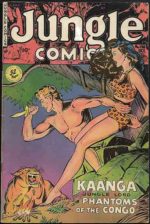 *Miscellaneous 1940-1959: While it looks a bit odd to the more ‘woke’ 2020s, the Jungle genre was hugely popular in the last century. In the wake of Edgar Rice Burrough’s famous Tarzan, every popular medium, including comics, was awash with implausibly-muscled, barely-clad white people hanging around in Africa saving grateful ‘natives’. Despite the unfortunate retrospective cultural baggage, many of these stories were beautifully crafted, and Fiction House, publisher of Jungle Comics, was one of the better practitioners, employing some of the finest writers and artists in the business. These three issues of Jungle Comics date between 1950 and 1952, all featuring the same line-up: peroxide Tarzan Kaanga and his shapely mate Ann, jungle psychic Tabu, Wambi the Jungle Boy (a rare non-caucasian protagonist in the genre) Captain Terry Thunder of the Congo Lancers, and Camilla, ‘Wild Girl of the Congo’. (They missed an opportunity for Camilla and Terry to team-up, since they were neighbours…) Like most Golden Age comics, creators were not credited, but informed sources tell us that writer Ruth Roche and artists Bob Kubbers, Jack Kamen and Enrico Bagnoli, among others, contributed to these issues, with the lead Kaanga story and accompanying covers illustrated rather spiffily by Maurice Whitman. These are attractive mid-grade specimens. #130 is VG/FN, with the only drawback being that a previous owner has attempted to brighten up the logo by applying whiteout on the letter ‘N’. Issue #139 is GD, off top staple, and #149 is FA, with considerable spine wear and writing on the cover logo. Full details, of course, in our online catalogue.
PICTURED: JUNGLE COMICS #130 VG/FN £43