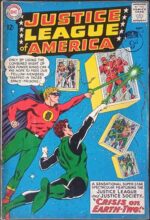 *DC: A pair of beauties that are among the closest to our collective hearts here at 30th Century – in Justice League of America #21 & #22, the ground-breaking ‘Crisis On Earth-One’ and ‘Crisis On Earth-Two’ the heroes of the Justice League met their parallel world counterparts, the Justice Society of America, for the first time, and an annual tradition was formed. Superbly created by Gardner Fox, Mike Sekowsky and Bernard Sachs, the multiple heroes and villains of these stories were expertly juggled, with everyone getting their moment to shine. The DC palette of cover colours were superbly used here with deep purple and almost turquoise blue backgrounds making the figures seem to leap off the covers, and these two well-preserved examples are just right to appreciate that. Both VG+ pence stamped, they have a little edge wear, handling wear and corner blunting, but tight staples and nice page quality, with unmarred cover images. I was blown away by the concept when I read these as a kid in 1963 — now’s your chance to be blown away too!
PICTURED: JUSTICE LEAGUE OF AMERICA
#21 VG+ p £70
#22 VG+ p £60