*Horror/Mystery 1960-1980s: By its tenth issue, Marv Wolfman and Gene Colan’s highly acclaimed run on Tomb of Dracula was in full swing, racking up plaudits from critics and fans alike, when suddenly there came a character who was to outstrip even the success of his comic book ‘parent’. Blade the Vampire Slayer debuted in issue #10, and, numerous comic-book appearances and a highly successful movie trilogy (Marvel’s first such, in fact) behind him, remains one of the more enduring breakthrough characters of the 1970s. With the Blade franchise shortly about to be ‘rebooted’, in the media’s voracious frenzy for new properties, Blade’s early appearances are once more spiralling upward, and the prices on this debut issue has risen substantially over the last year. This is a pence printed copy, in lovely glossy condition, tight and flat with great staples and white to off-white pages. Wear is restricted to tiny stress marks at the staples and a tiny nick towards the top right edge of the cover. There is a soft crease diagonal for about 9 cm from the centre of the right cover edge, but this only just breaks colour and is barely noticeable. Without it, this copy would grade better than VF and be comfortably in four figures, more than twice as expensive. High resolution images are available on request.
PICTURED: TOMB OF DRACULA #10 FN p £850 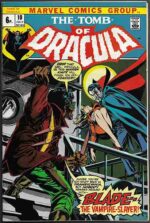