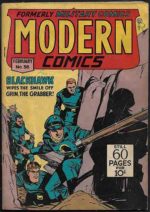 *Miscellaneous 1940-1959: You’d be forgiven for raising an eyebrow at this header, but it’s okay – they’re old Modern Comics! Launched in 1941 as ‘Military Comics’, this anthology series starred Blackhawk and his international squadron of aviators, as they battled an ever more bizarre array of villains (and slinky and curvaceous villainesses), backed up by an assortment of adventure and comedy strips. Among the latter was Bill Ward’s ‘Torchy’, a statuesque blonde who appeared to be a spiritual sister of the Daily Mirror’s newspaper-strip heroine ‘Jane’, in that there was no situation, no matter how unlikely, in which she wouldn’t end up in lingerie or revealing clothing, causing chaos all around her! After the war, the title changed its name to ‘Modern Comics’, continuing with the adventures of the Blackhawks in the lead, by Reed Crandall, Klaus Nordling, George Evans and other superlative artists, but the other adventurers largely left the building, and Torchy was joined by a whole bunch of comedy cohorts including Gill Fox’s ‘Choo-Choo’, who vied with Torchy for the ‘Good Girl Art’ award in any given issue! We have eight of these delightful anthologies newly listed, commencing with 1947’s #58, to #93 in 1950.
PICTURED: MODERN COMICS # 58 VG+ £58