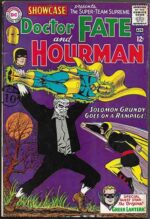 *DC: Well, technically they returned, along with other Justice Society members, in Justice League of America #21, but this was the first time since the Golden Age that readers had had a chance to see these heroes as more than faces in a super-crowd, and with the talents of scripter Gardner Fox, illustrator Murphy Anderson, the villainous Solomon Grundy and guest-hero Green Lantern (Alan Scott), this was a truly epic battle, as the supernatural Doctor Fate and the super-scientist Hourman joined forces against an eldritch menace which threatened to overwhelm them both! Comics as they should be! This is a lustrous above average copy with deep purple background, minor edge and spine wear, slightly blunt corners, good staples and page quality and an unusual placement of the pence stamp near the spine, where it detracts less from the cover image.
PICTURED: SHOWCASE 55 FN+ p £160