*Miscellaneous 1940-1959: One of the jewels in the crown of the Bute Collection this week. Published in January 1940, Marvel Mystery Comics #3 ties with Daring Mystery Comics #1 as the third ever Timely or Marvel comic (discounting the unpublished movie-theatre giveaway comic Motion Picture Funnies Weekly in 1939).  The first ever Marvel/Timely comic was Marvel Comics #1 in 1939; the series changed its name to Marvel Mystery Comics with #2 and this is the following issue. As such, this is of great historical significance. The content comprises a Sub-Mariner tale by Bill Everett (featuring the first appearance of Betty Dean), the Angel, the Human Torch, Ka-Zar, American Ace and the Masked Raider.
Please note that is a restored copy. The restoration looks to be by an amateur rather than to a professional standard. The spine and edges have been taped in places on the interior covers, with colour touches at spine and some edges. Some small portions of the front and cover have been replaced by photocopies (all seem to be in corners or edges), and it looks like there has been some staple reinforcement. Several small sealed tears, plus a longer one or two over the logo. Having said that, the comic holds together pretty well, and the interiors are clean and presentable with no defacements. A very rare opportunity to purchase such a rare and significant item. High resolution images are available on request, but there is a good chance someone will order this before we can get those to you.
PICTURED: MARVEL MYSTERY COMICS #3 Apparent FA+ £3,000 SOLD 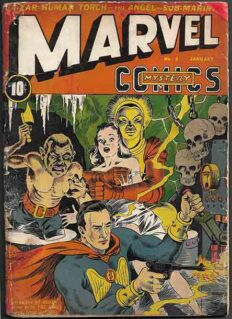