*Horror 1940-1959: It doesn’t come any more Pre-Code than this: Eerie #1 from Avon 1947. This is the legendary comic book that started the horror comics trend of the 1940s-50s, as well as the first horror comic with original content, long before the Comics Code was introduced. A man is haunted by the ghost of a stuffed tiger; an island is populated with flesh-eating lizards; a man disposes of his nagging wife with a subway train, but then is haunted by visions and hallucinations. The backup story is a humorous tale starring Goofy Ghost. Stories by sci-fi legend Henry Kuttner, working under one of his many pseudonyms. Cover by Bob Fujitani. Edited by Sol Cohen. Art by Bob Fujitani, Jon Small, George Roussos, Fred Kida and Joe Kubert. This was the only issue of this run, but the title returned as a regular series in 1951 (starting with #1 again). This is a decent copy; tight and flat with good, firmly attached staples, nice page quality and an unspoilt cover image. There are some specific defects which bring the grade down: a small 3.5 cm piece of tape reinforces the bottom spine, and what looks like rodent chew has attacked the top corners, going right through the comic to varying degrees, but no more than 2 sq cm at its worst; this can be seen on the scans provided and only affects the covers and margins of the stories. You probably won’t get too many chances to add this important comic to your collection. High resolution images are available on request.
PICTURED: EERIE #1 (1947) FA/GD £1,000 SOLD 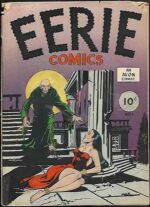