*Miscellaneous 1960 Onwards: I still remember the thrill when an issue of Thunder Agents came out in the mid-1960s. Wow – you got 5 stories each issue in an extra-thick comic! Of course, at age 11, I barely knew who Wally Wood was, but I knew I liked the artwork. And the writers for these super-powered secret agents (a unique hybrid of the super-hero and spy genres) kept the words to a minimum, letting the art tell the stories. And it wasn’t just Wood: Crandall, Ditko, Kane, Sekowsky & Whitney were also represented, along with less notable but mainly competent others. We have a new selection in, every issue from #1 and #19 (except #14); the final issue, #20 was all reprint. Plus all four of the solo Dynamo spin-off series and both issues of the Noman solo spin-off series; as a bonus, issue #4 of the companion title UNDERSEA Agent. Highly recommended.
PICTURED:
DYNAMO #3 VG- p £8.50
NOMAN #2  FN+ £16
THUNDER AGENTS #8 FN p £13.25
THUNDER AGENTS #18 FN+ £16 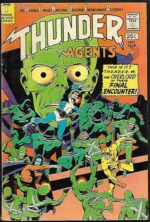 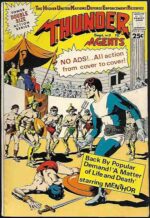