*War: We conclude our massive sequence of updates to our War stock with a large selection of DC titles, starting out with Captain Storm and G I Combat. There’s a lot of Our Army At War, featuring Sgt Rock (including #162 with the Viking Price), but mostly nice copies in the 200’s range. Our Fighting Forces commences with some relatively early issues with Gunner, Sarge & Pooch, then moving on to the Losers (inc #123, the first Losers app). Star Spangled War starts out with dinosaurs in ‘The War That Time Forgot’; there’s solitary Enemy Ace and Unknown Soldier issues, and we round off with several issues of Weird War Tales. Much lovely Joe Kubert artwork, particularly on covers, is in evidence, but there’s also Toth, Heath and even Kirby within these pages. That’s it — war is over (at least for now), Merry Christmas (as someone once sang). Peace has broken out.
PICTURED:
OUR ARMY AT WAR #162 VF- £48
OUR FIGHTING FORCES #123 FN+ £28
STAR SPANGLED WAR STORIES #120 FN+ p £38 SOLD 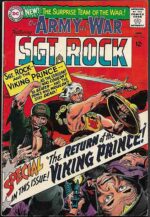 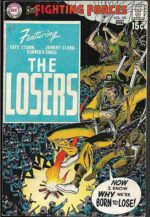