↓
Home→What's New→American Update: Werewolf By Night – From #1, including early appearances by Moon Knight

*Horror/Mystery 1960-1980s: After a few issues in Marvel Spotlight, unfortunate lycanthropic teen Jack Russell (yes, we know) proved such a hit that he launched into his own series with fine scriptwork from Doug Moench and superlatively evocative illustrations by Mike Ploog. This happy alchemy continued until the late teens, when it all went a bit Don Perlin on the visual front, and the series never really recovered, although it did continue until #43 despite Mr. Perlin’s blocky figurework. A boost to the issues in latter years, however, has come from interest in the Moon Knight character, who debuted in #32 (NOT in this update), and made several subsequent appearances in the series. We have a newly added ten issues of WBN from #1, in a very affordable FA, to #37, including #15 (a classic Werewolf/Dracula battle), and #33 and #37, the second and third ever Moon Knights, respectively.
PICTURED: WEREWOLF BY NIGHT
#15 VF/NM £80 SOLD
#33 VG+ £80
#37 NM- £100 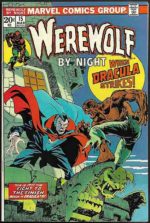 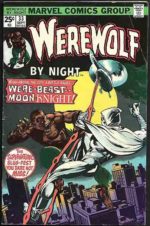 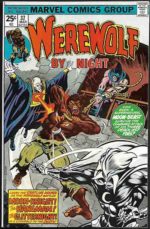