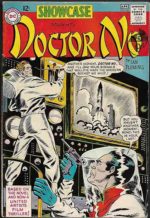 *DC: What’s Old is our feature where we highlight stuff from our catalogue that you may have missed. One of the more oddball entries in the DC annals, Showcase #43 began as a projected issue of Classics Illustrated. The story was ultimately rejected by the Classics publishers as ‘too adult’, and its only first printing appeared in the insanely rare UK Classics Illustrated #158a. This material was repackaged by DC as issue #43 of its ‘tryout’ series Showcase with a new cover by Bob Brown, but being released before the film, it was a bit of a flop, and DC lost the license which, decades later, several other publishers took up to good effect. Subsequent popularity of the James Bond character in multiple media has made this issue highly sought-after in retrospect. Our copy is pence stamped, with good cover colour and gloss, tight staples and only light wear at bottom corners.
PICTURED: SHOWCASE #43 FN p £120