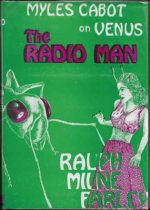 *Science Fiction, Fantasy & Horror: Three vintage science-fiction hardcover editions for your consideration this week. Firstly, one of the classic works by British author Edmund Cooper, The Tenth Planet, FN in FN DJ, 2nd UK HC from 1974. Secondly, the famous pulp epic The Radio Man (aka An Earth Man on Venus) by Ralph Milne Farley; although this edition purports to be a 1st from 1948, it clearly isn’t, although no data is available on its vintage, other than it’s post 1969; FN in FN DJ. Finally, an intriguing anthology edited by Martin Greenberg, The Robot And The Man, a 1st edition from 1954 (VG/FN no DJ), with stories by well-known authors with robot themes. Full details of course in our website catalogue.
PICTURED: THE RADIO MAN by Ralph Milne Farley; US HC, FN with FN DJ; later printing £10