*Childrens’ Books:  First appearing in the Magnet #1 (1908), Billy Bunter was originally a minor character in the stories of Greyfriars School, but as time went on and the stories grew in popularity, author Frank Richards (Charles Hamilton) realised the comic potential of his most famous creation, so much so that after the Magnet ceased publication in 1940, Bunter was the starring figure in his own series of novels from 1947 to 1967. We have five examples joining our stock this week (all HCs with Dust Jackets): Billy Bunter Afloat & Bunter Out Of Bounds are 1st editions, Billy Bunter’s Double a 3rd edition, and Billy Bunter Of Greyfariars School (the 1st Bunter novel) and Billy Bunter And The Blue Maurituius are faithful facsimiles published by Hawk Books. The ‘Fat Owl Of The Remove’ has now passed into legendary status as an icon of English literature, so here’s your chance to get acquainted with his antics. Yarooh!
PICTURED:
BUNTER OUT OF BOUNDS: 1ST VG/FN WITH DJ GD £35
BILLY BUNTER AND THE BLUE MAURITIUS: FACSIMILE VF WITH DJ VF £25
BILLY BUNTER’S DOUBLE: 3RD FN WITH DJ VG £30
BILLY BUNTER AFLOAT: 1ST VG/FN WITH DJ GD £35 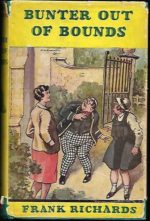 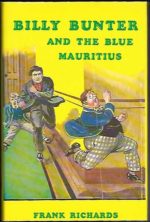 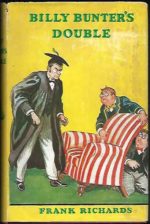 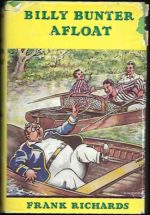