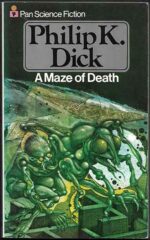 *Science Fiction, Fantasy & Horror: Philip K Dick is one of our best-selling authors. I guess his themes of religion, drugs, counter culture and destructive relationships appeal. So we’re pleased to present five of his works this week in paperback. A Maze Of Death is a surrealistic murder mystery on a mysterious alien world; the classic Martian Time-Slip is about the material and mental struggle for survival in the Martian colony; Radio Free Albemuth (his last posthumous novel) touches on paranoia, political repression, the decay of American society and the plastic nature of reality (I guess you could call these his themes too); The Divine Invasion has at its centre the Second Coming; and The Golden Man is a collection of 15 short stories. Full details of all in our catalogue.
PICTURED:
A MAZE OF DEATH VF £15 2nd UK PB
MARTIAN TIME-SLIP VG/FN £10 1st UK PB