*Crime, Spies & Sleaze: John Pollack is a name frequently seen on 1940s/1950s British gangster pulp fiction digests, although most of these are particularly hard to come by these days; he was a local artist (like the more (in)famous Reginald Heade) and lived in Clapham, South West London. Pollack’s women were gorgeous and glamorous and his men were chiselled tough guys.  James Hadley Chase was a prolific and accomplished writer who made his name in that medium, but carried on into later decades with  more ‘mainstream’ crime. This update we have a selection of books from the 1950s which feature their work together. Four paperbacks (Hit And Run, Not Safe To Be Free, Safer Dead and You Find Him – I’ll Fix Him) and one hardcover (You’ve Got It Coming), beautifully published by Robert Hale in matching editions.
PICTURED:
NOT SAFE TO BE FREE VG £8
YOU’VE GOT IT COMING VG (HC WITH VG DJ) £15 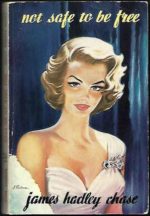 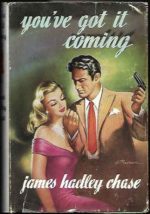