*Crime, Spies & Sleaze: I’m often harping on here about the Queens Of Crime, those indomitable (mostly) Briitish women who dominated the crime/detective genre in the Golden Age Of Detective Fiction, roughly between the wars. Well, there was one male writer active at the time who was their equal, and he was an American to boot, although he lived a significant part of his life in England, where his tales were set. John Dickson Carr (who also wrote as Carter Dickson) was the master of the locked room mystery, a setter of seemingly impossible puzzles for his recurring cast of detectives. Foremost among these was the larger than life Dr. Gideon Fell, who concerns us in three of the four classic novels here this week, all in attractive vintage American editions from the 1950s with pulp-like cover art.
PICTURED: ALL BY JOHN DICKSON CARR
THE EMPEROR’S SNUFF-BOX VG £8 US PB 1959
HE WHO WHISPERS VG £10 1st US PB 1951
THE SLEEPING SPHINX FN £12 1st US PB 1952
TO WAKE THE DEAD VG £10 US PB 1950s 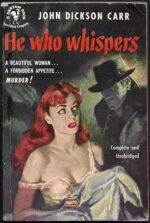 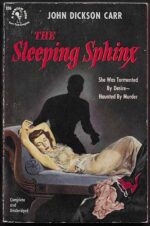 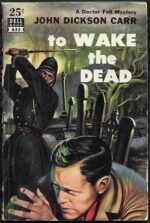