*Crime, Spies & Sleaze: Mike Shayne was a hard-boiled private detective in the vein of Philip Marlowe, Sam Spade etc. He was created by writer Brett Halliday in the 1930s, and starred in 77 novels and over 300 short stories. As well as the character having a magazine in his name for over 30 years, a dozen films of Mike Shayne were made in the 1940s and 1950s, plus a radio series and a TV series in the 1960s; he was a popular chap back then! From 1958 onwards, Shayne’s adventures were ghost-written. Our selection of Dell paperbacks new in this week features some written by Halliday in later printings, as well as many of the later ones by other hands. What is really nice about them is that they all feature covers by the famous artist Robert McGinnis, known for his film poster work on Breakfast At Tiffany’s, Barbarella and several James Bond films, among many others. At 94, McGinnis is still around and has illustrated over 1200 paperback books with his distinctive style featuring sexy women. Several examples from this update are pictured here — our catalogue lists the entire 15 books in this update.
PICTURED: (all by Brett Halliday)
GUILTY AS HELL 1st US PB 1967 FN £5
MURDER BY PROXY 1st US PB 1963 FN/VF £5
SO LUSH, SO DEADLY 1st US PB 1968 VG/FN £5
THE HOMICIDAL VIRGIN 1st New Edition US PB VG/FN £6 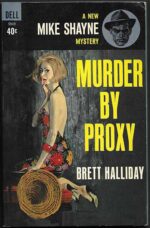