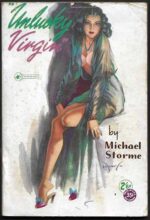 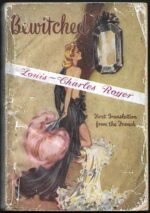 *Crime, Spies & Sleaze: Post-war faux American gangster novels (often termed pulps due to their paper quality) written and published in the UK have become something of a collector thing over the last decade or so. Written mostly by house names and featuring sleazy dame covers, the most famous of these are by the Hank Janson/Reginald Heade combo, but there are plenty of other fish in the sea too, for all the rarity of editions that have survived the decades. Just two additions this week: Bewitched and Unlucky Virgin; the former is pretty much sleazy romance rather than a gangster tale, but the luridly attractive cover puts it squarely in the same collector market; the latter is a US imprint of a UK original.
PICTURED:
BEWITCHED by Louis-Charles Royer FA £15; 1st UK PB 1952. Evocative art nouveau cover by David Wright. Translated from the French. Much cover wear around all edges, but central image remains unaffected.
UNLUCKY VIRGIN by Michael Storme VG £35; 1st US PB 1951. Striking cover by Thorpe. A little dingy with wear at top edge, but intact spine.