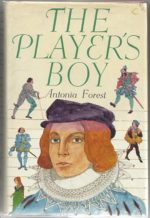 *Childrens’ Books: Antonia Forest is best known by aficionados of children’s literature for her series of novels about the Marlow family set in the 20th century, The Player’s Boy is set in the time of Queen Elizabeth I; it tells the story of an ancestor of theirs, who runs away from his family hoping to sail to America. Instead he meets not only Kit Marlowe but also William Shakespeare, and ends up joining the Lord Chamberlain’s Players. The book is graded VG, with a water ripple at the top of the first few pages (but no sign on the boards; otherwise the book would grade higher). The dust jacket is also graded VG, with very slight erosion at the ends of folds and a small mark at the top right of the front cover. The evidence of the book’s former life as a library book is limited to a large and very pink label on the flyleaf and a stamp on the publisher’s page. This is a rare opportunity to obtain a first edition by ‘the ‘Jane Austen’ of children’s literature’.
PICTURED: THE PLAYER’S BOY VG (DJ VG) £80